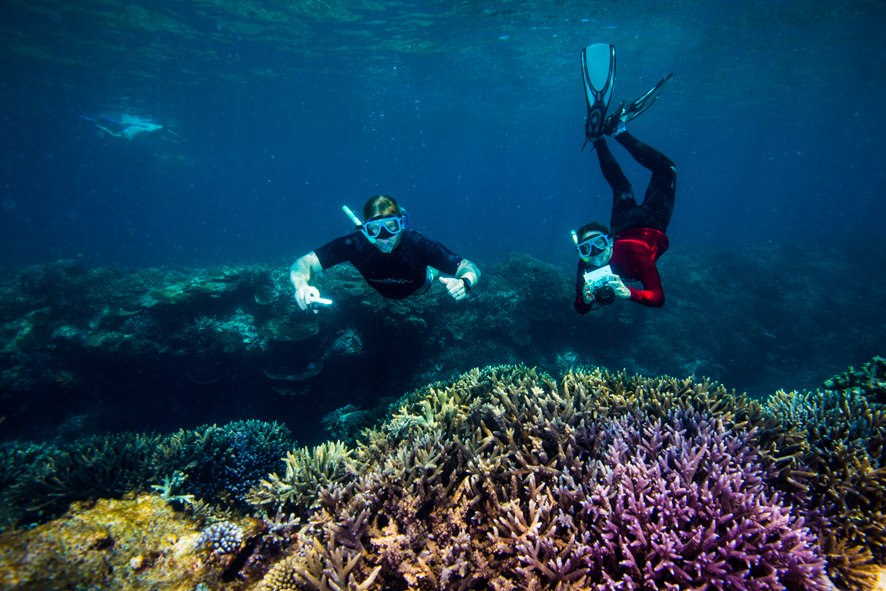 Out of the Box Solutions to Barrier Reef Destruction Live On

The 2018 Out Of the Blue Box Innovation Challenge, spearheaded by SecondMuse and key partners, spurred innovation that continues to bring hope to one of the most vital but threatened marine ecosystems on Earth.

Out of the Blue Box Challenge

One of the starkest examples of the devastation climate change has already wrought on our planet can be found in the warming waters off the coast of Australia. The Great Barrier Reef, the world’s largest coral reef system and one of its richest natural ecosystems, is dying. Scientists have attributed “mass coral mortality” to marine heat waves caused by greenhouse gas pollution. They have also warned that accelerating damage to the reefs and the species that live there may be irreversible.

Unprecedented bleaching events — processes in which warm waters leave corals vulnerable to damage and disease — drew SecondMuse to this global challenge in 2018. In collaboration with the University of Queensland, Great Barrier Reef Foundation and with support from Tiffany & Co. Foundation, we put out a call for bold solutions to rapidly restore coral reefs. The Out of the Blue Box Innovation Challenge offered AU$450,000 in prize money to support leading “out of the box” innovations. Over the course of five months, we engaged more than 400 people and organizations, reviewed 64 applications from 15 countries and recruited a team of 23 evaluators and 5 expert judges to select the most promising solution to one of the marine world’s most pressing issues.

The top prize went to Southern Cross University’s Professor Peter Harrison and Queensland University of Technology’s Professor Matthew Dunbabin who together pioneered a system to rapidly restore the reefs through a technique now referred to as Coral IVF.

Harrison had already been working on a system to facilitate coral reproduction by collecting hundreds of millions of coral spawn released during mass spawning events and rearing them into baby corals inside floating enclosures. Dunbabin, meanwhile, developed new robotic technology that can deliver coral larvae to damaged reefs at a massive scale to help restore them. The approach, they said at the time, promised to vastly multiply the number of coral babies produced, and more accurately settle them onto reefs in most urgent need of restoration.

“There is a closing window of opportunity for the world to act on climate change and the sharp threat facing coral reefs globally,” Anna Marsden, the Great Barrier Reef Foundation Managing Director, said in response to the winner’s announcement in 2018. “Our increasingly changing climate underscores the urgent need to fund the next generation of ideas that give our coral reefs a fighting chance and this is exactly what this challenge aims to achieve with the support of The Tiffany & Co. Foundation and partners The University of Queensland and SecondMuse.”

The team was awarded $300,000 AUD (approx. $225,000 USD) to bring their idea to life. An additional $150,000 AUD ($110,000 USD) was also awarded to the People’s Choice innovation — the project that earned the most public votes. Brazilian scientist Professor Raquel Peixoto won the award for a new way of treating vulnerable coral reefs with probiotics. “The idea of giving probiotics to corals to improve their health is just like people taking probiotic yoghurts full of good bacteria to counter the negative effects of taking antibiotics when they’re treating an infection,” Marsden explained. The funding enabled Peixoto to accelerate research into the concept and investigate new methods to scale up its application.

Since the challenge wrapped up in 2018, the winners have continued their urgent work toward saving the planet’s coral reefs. Their efforts have drawn global media attention. Last year, a number of outlets and institutions around the world — from the World Economic Forum to Travel + Leisure — reported on the inspiring conclusion to the researchers’ first Coral IVF trial on the Great Barrier Reef, initiated in 2016, and ramped up with support from the Challenge. Coral involved in the trial survived subsequent bleaching events and were on track to reproduce. “This proves that the larvae restoration technique works just as we predicted and we can grow very large corals from tiny microscopic larvae within just a few years,” Peter Harrison told Reuters.

Though our direct part in this global challenge lasted months, we feel inspired to see the partnerships and innovations we supported live on. Enormous global challenges, like the one facing the Great Barrier Reef, call for bold solutions and collaboration. They are too complex for technologists, academics, governments or businesses alone to solve in isolation. They require out of the box ideas and partnerships, and bold calls to action that spur enduring and inspiring change.