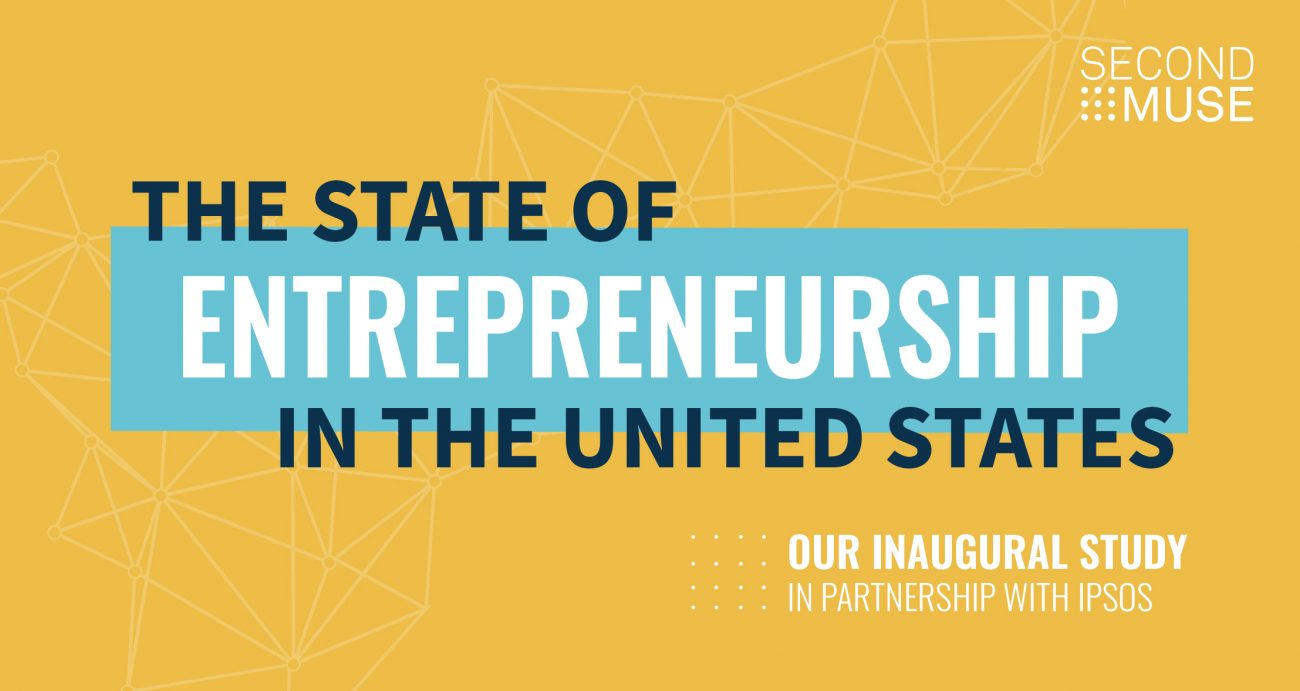 “The State of Entrepreneurship in the U.S.” study revealed that entrepreneurs believe the country’s economic system is fundamentally unfair and creates many added barriers to success for some.

In October, SecondMuse released the results of its inaugural survey on “The State of Entrepreneurship in the U.S.” The study, in partnership with Ipsos, gathered responses from over 200 entrepreneurs in the U.S. These small business owners and innovators, the survey revealed, believe the country’s economic system is fundamentally unfair — it creates many added barriers to success for entrepreneurs who are women, BIPOC, less wealthy, less educated or from certain geographic areas.

And yet, entrepreneurs have a strong desire for racial equity and a level playing field, the survey also found. So how do we get there?

To dissect the key findings of the study and offer solutions and steps toward a more inclusive future economy, SecondMuse Co-CEO Todd Khozein hosted a webinar with two thought leaders on inclusion and social impact: Marla Blow, SVP of Social Impact at Mastercard, and Bill Taft, who leads the expansion of inclusive economic development efforts at the Local Initiatives Support Corporation (LISC).

Here’s an edited recap of the discussion that followed.

There’s an idea that entrepreneurs care only about profits. But 60% of the entrepreneurs we surveyed said their “top concern” is making the economy more inclusive. Is this surprising?

Marla Blow called the desire for an inclusive economy “completely rational and very consistent” with the interests of business owners and entrepreneurs. That’s because they recognize that the major social divides like racial inequality that we’re currently experiencing in the U.S. are also major risks to stability and our democracy. Entrepreneurs know that trustworthy systems, infrastructure and institutions are critical to running a successful business.

Bill Taft added that entrepreneurs tend to be very “attuned” to the communities and customers around them that they’re trying to do business with. On top of that, they often consider themselves “outsiders” who have first-hand experience of the system not working for them — due to regulatory or other issues — and therefore can empathize with other entrepreneurs who face even greater barriers.

Entrepreneurs also believe it’s harder to be an entrepreneur if you live in certain cities in the U.S. How do these various race, gender and geographical barriers play out?

“Every entrepreneur has scars. It is tough,” Blow said, listing some of the common challenges. But those challenges are even harder for Black, Hispanic and LGBTQ+ entrepreneurs, as well as entrepreneurs who live anywhere outside the cities where venture capital is concentrated — specifically New York, San Francisco and Boston. She spoke about a real need for change in who is making decisions about how capital is allocated, as the disparities between what straight, white men in New York or the Bay Area receive versus, well, basically anyone else are “appalling.”

Taft spoke about how the COVID-19 pandemic has further highlighted these disparities. He pointed to LISC research that indicates that white-owned businesses have 7-10 times the start-up capital that Black-owned businesses have — which mirrors racial wealth gaps in society as a whole. “There’s just not that cushion that gets you through the lean times or unexpected things, or allows you to launch something new that isn’t proven yet,” he said.

And having grown up in a former steel town outside Gary, Indiana, Taft said he’s also very sensitive to the geographical disadvantage of entrepreneurs in the Rust Belt versus coastal cities. In many smaller cities and rural areas, there “just isn’t good infrastructure to support small business at all,” he explained. “It’s a huge difference.”

A webinar participant expressed that it feels like society keeps hanging entrepreneurs “out to dry.” How can we strengthen the safety net for entrepreneurs who are struggling to shoulder the costs of employee healthcare and PTO on top of all the other risks.

Blow said the pandemic brings this problem front and center: People need access to medical treatment, and entrepreneurs should be able start a business and risk it failing without also losing their healthcare, savings plans, etc. She highlighted the importance of advocacy efforts around figuring out what a sustainable benefits infrastructure looks like, and who bears the costs.

Nearly 90% of the entrepreneurs surveyed believe community-level coordination is essential to their success, but more than half find it hard to secure local resources for their business. And for women, it’s twice as hard. Why is local support essential?

Taft explained that grassroots, community-embedded organizations that are culturally competent to deal with their local entrepreneurs are typically the best-equipped to craft the investment, technical support, etc. that local entrepreneurs need. State, national or international systems or organizations, on the other hand, tend to be more challenging for entrepreneurs to navigate and see direct benefits from.

Blow agreed that local support is “hugely helpful” to entrepreneurs, and encouraged everyone to take advantage of the economic development agencies, industry groups, etc. in their communities. It’s something she wishes she had done much earlier in her own entrepreneurial career. These networks provide access, hiring support, etc. as well as very simple but invaluable advice like “Hey, don’t lease a space in that building over there.”

Seven out of 10 of the entrepreneurs surveyed see the COVID-19 pandemic as an opportunity to reform the economy. But how do we build a better, more inclusive economy today?

Blow pointed out that crisis moments often spark greater willingness to try something new. She said we have to address bias, which causes economic inefficiency and a drag on society and markets. Our leading economists need to propose new models that take bias into account. One hopeful sign is the Federal Reserve’s announcement that it’s going to start to address racial equity in the way it thinks about the U.S. economy, which Blow calls a “monumental shift” in how we approach and govern markets.

“The inequities in our economy were often intentional and it’s going to take intention to reverse them,” added Taft. He went on to describe how he’s seen the pandemic raise awareness of just how important small businesses are to the communities where big corporations also operate. Local entrepreneurs create jobs, improve the quality of life, and generally make it better for everyone.

Blow chimed in to underscore the importance of just how much big business relies on small business, even in a pandemic. “When people don’t go to [local] restaurants, Mastercard is acutely aware of that fact.”

What are ways big corporations can best support and engage with entrepreneurs, particularly women- and minority-led startups?

Blow’s No. 1 recommendation: Simplify process. Going through the hoops just to get a first round of business underway is an incredibly demanding and daunting exercise, she said. “Corporations need to make that point of entry simpler, more obvious and less reliant on, ‘I happen to be in the country club with the guy who happens to know someone in purchasing at a big company in my local area.’”